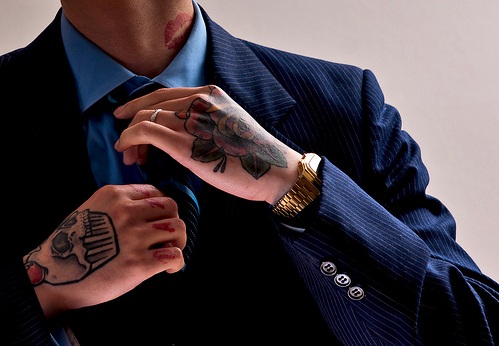 One of my favorite parts of being in HR is recruiting, specifically if I have to interview someone. It’s always interesting to meet new people and see the different approaches people take in answering questions, listen to their various experiences and get to see how they compare against their C.V.

One thing I didn’t think I would have to consider during the start of my career was visible tattoos, piercings and casual clothing. The reason for my lack of consideration is quite simple, people should be judged for their ability and intellect as opposed to the piece of metal sticking through their tongue, like the old adage says ‘you can’t judge a book by its cover.’ Furthermore, imagine how wider the talent pool is if everyone is included, genius is then not missed because it came for an interview in sneakers and hot pink hair. The world has not been shy about pointing this out, checkout the meme’s below. 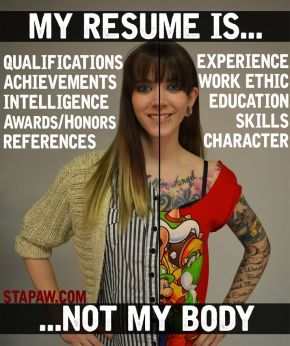 However, certain considerations need to be taken into place, foremost amongst them workplace image. For example, if someone showed up for an interview for a job that would require them to wear a suit and tie in anything less than, it would appear to be fair grounds for non-selection. 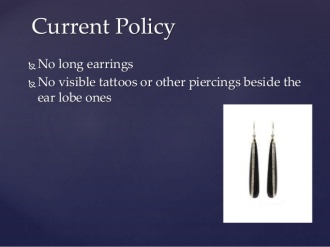 Furthermore, having visible body modifications such as tattoo’s and piercings make a statement about an individual, whether it’s intended or not. This may be perceived as quite problematic for organisations that strive to portray a particular image and have specific dress requirements, codes of conduct and rules and regulations for their staff concerning physical appearance.

Nevertheless, with a whooping 47% of Millennials (Generation Y) having tattoos, non-traditional piercings being the norm and bright non-natural colored hair being the latest fad, it needs to be a conversation that every recruiter and decision maker is having. What are you willing to accept to get the right talent through the door?

It is worth noting that Generation Z (The generational cohort after Millennials), is more conservative than their predecessors. A British study  found that Generation Z participants were ten times more likely than Millennials to dislike tattoos and body piercings, thus perhaps this may not be an issue  in the future.

One thought on “Tattoos, Piercings & Hot Pink Hair in the Workplace.”